Yesterday Gamer’s Almanac covered five modern takes on the rogue-like genre, including Ruin of the Reckless. Today we have an exclusive interview developer Charles Webb, from Faux-Operative games to get an insider’s perspective on this forthcoming rogue-like. I’d like to thank the team at Faux-Operative games for letting me interview them. I’ve really enjoyed my time with the game so far and it was great to learn more about the game from one of the developers himself.

GA: Oftentimes, rogue-like games can be frustrating and unforgiving. Though you yourselves have described Ruins of the Reckless as having a “punishing difficulty curve,” with its system of giving the player prizes for completing different challenges and the option to customize your run with chaos cards, Ruins of the Reckless stays rewarding. How did Faux-Operative games address keeping the difficulty level balanced throughout development?

FOG: Well, this is obviously a really important aspect of any rogue-like. We knew we wanted the game to be ‘as hard as possible’ without really being unfair or so brutal as to make players quit. What we ended up doing was setting the difficulty really high in Beta, and then toning it down based on player feedback until we stopped hearing complaints about the difficulty. The game is really tough right now, but feels judiciously fair.

GA: If I were to pick one word to describe Ruin of the Reckless’ gameplay, it would probably be fast. Its retro gaming and twin-stick shooter influences are clear once you start to play the game and see how quickly everything moves. What would be your advice for future players of the game to help them get used to playing a game with such high stakes and intense speed?

FOG: Always be conscious of what you need to do to make space for yourself. Often, the best thing to do is to push enemies back in to each other to knock big crowds away and give you time to spare. Also… don’t sleep on upgrading your Power Orb because almost every Power Orb is super strong when upgraded to level two or three.

GA: Ruin of the Reckless might be fast-paced, but your team has also done a great job of keeping the story well paced and making sure that you don’t miss the details of the art, music, and writing while you play. How did you come up with the right style and tone to balance your gameplay?

FOG: Well, story is very minimal. We were modeling a kind of ‘Dark Souls’ vibe where the player can engage in the story to the degree that they want to by talking with NPCs and putting the pieces together based on what they say. We rarely come out and say any thing directly… That was never the tone we wanted to set about the spirits in this tower. I will say that I put a TON of effort and time in to making really special and surprising endings for each of our two characters and because the game is so difficult… I sometimes wonder what percentage of players will actually see them!

GA: Procedurally generated levels and worlds such as those in Ruin of the Reckless are becoming a lot more common and are being used to increase replayability value of games. What are your thoughts on how procedurally generated games are changing the gaming industry and the expectations of players, and what do you feel are the strengths and weaknesses of procedural generation from a developer’s standpoint?

GA: One of Ruin of the Reckless’ most exciting features is the option for local co-op play, which you cite as one of the original ideas for the game. Do you find that the experience of the game goes smoother with a second player to lend a hand?

FOG: Haha, i’m not so sure about that! We don’t spawn any extra items for the second player, so keeping both players well equipped is really difficult, no extra health potions even… players also share money, so no extra resources there. Additionally, players can hurt each other, and if they’re not being careful about it that will happen often. That’s all by design though, co-op is almost like a separate ‘teamwork based’ game that plays very differently than the single player experience. In our testing it seems about the same difficulty as the Single player, depending on which Chaos Cards you have equipped of course. 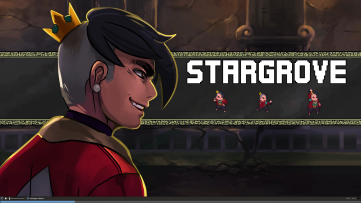 Stella, designed by Faux Operative Games in coordination with their top kickstarter backer

GA: Stargrove and Stella are a great pair with a distinct style. How did your team come up with such unique designs for these characters?

FOG: Stargrove went through a ton of iteration and design early in the game, we had a really great artist on the team and we must have sent back about 10 designs to his increasing frustration. Eventually he sent us this scarred up maniac with a half-mohawk… thing and we thought… “YES! That’ is what a spirit inside the Ruin of the Reckless looks like.” It just clicked and we knew it was perfect.

Now… as for Stella, she was actually a backer reward for our top backer (Ishkandar Azani) during our Kickstarter campaign. He told us he wanted something that combined Mercy from Overwatch, with Aigias from Persona 3, with Genos from one Punch man but he wanted her to be a pretty girl, he wanted her to be ‘queer’, and he wanted her to have rolling pink hair. What can I say? He was our top backer so we gave his directions to our top artist (Rafael Francois) and had him make exactly what Ishkandar wanted. You can learn more about her origin if you beat the game with her… but overall we couldn’t have been more happy with Ishkandars design… he just got it. He understood exactly what we were trying to do and that she needed to be a foil for Stargroves rougher attitude.

GA: Faux-Operative was founded after Ruin of the Reckless received a great amount of support and funding from fans of the idea, and you’ve been producing beta-builds for backers and working full-time as developers ever since. How does it feel for your original idea from 2014 to have garnered enough support to let you put all your time and efforts into it?

FOG: Haha! Well when we first decided to quit our jobs and make this game… we named it ‘Ruin of the Reckless’ because we were pretty sure that we were insane and had set off to destroy our lives financially. Well… We’ve managed to develop a dedicated community, been featured on TotalBiscuit’s official podcast, had meetings with major publishers, write ups on major news sites… Well I guess we’re pretty happy with how things have turned out so far!

The indie market is super crowded right now, there are really no guarantees these days, even if you know your game is good… and we do. Just this month there have been several stellar releases and it’s only the seventh! So we’ll have to see what happens on April 26th when we release. But it feels good. It feels good to know that people are enjoying the game already. Whatever happens, I know that we made a beautiful and unique game that people will love, and one with a secret kernel of sadness hidden away inside. It’s not often in this world that you get to throw caution to the wind, ignore the consequences, and just ‘make what you want.’ We are proud and grateful for the opportunity.

GA: What’s next for Faux-Operative now that Ruin of the Reckless is almost released? Do you have any other ideas for games in the works?

FOG: The biggest thing is our board game: ‘Faux-Operative’; we actually made the game before we even started working on Ruin of the Reckless… Friends have pulled me aside and said “this game is better than Catan, you need to release this somehow or you’re a fool!” so that’s definitely on our minds! So, minus polish, some minor balancing… and art, it’s already done and we really want to release it soon if we can!

‘Faux-Operative’ is a mashup of traditional role-playing, rules based board games, rogue-likes, and blade-runner style ‘low science fiction’ world-building. Players each take on the role of one of ten dystopian secret operatives (each with unique abilities that increase as they level up) as part of a joint mega-corporate effort to raid the last bastion of ancient technology left in the world. The catch…. The corporations all actually hate each other and players can betray the team at any time. To make matters worse, one of you may be already be the ‘Faux-Operative’, a full blown traitor whose only goal is to make sure no one escapes alive. Even if there is no Faux-Operative, anyone of you could become the Faux-Operative at any time… so It’s pretty cut throat. You have to either pull together to win as a team, or choose just the right moment to betray your opponents… Most of the time… EVERYONE loses…

Ruin of the Reckless will be available on Steam (PC) and Itch.io on April 26th. For more information about Ruin of the Reckless, visit Faux-Operative’s official website. To find out more about the game before release, follow Gamer’s Almanac for a forthcoming review.

View all posts by Almanac

Gamer's Almanac is a site that covers all types of game news and publishes reviews written by your very own Almanac.

Gamer's Almanac is currently on hiatus. I now work full time job as a game designer, and don't have a lot of time for reviews. Thanks for reading and gaming! 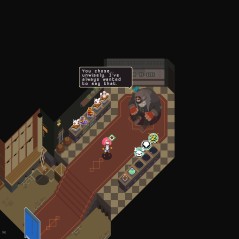 One of the shopkeeper’s taunts. From Ruin of the Reckless, developed by Faux-Operative Games

Sunset on an ancient structure. No Man’s Sky, developed by Hello Games.